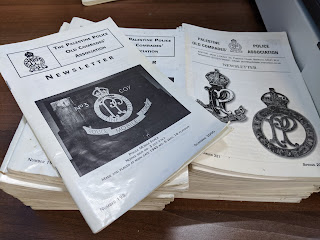 A very interesting historical order that we are preparing, is a vast collection of The British Palestine Police Association (BPPA) newsletters and magazines, which are being converted to PDF with Optical Character Recognition, to support their valuable and historical archives.

If we can support you with your archives, please do contact cheryl@oxfordduplicationcentre.com

This to be achieved by: 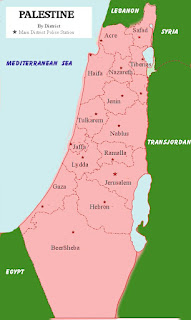 Side-affects and Paradoxes - the major factors shaping the histories of both British-administered Palestine and its police force.

The initial phase of British control between 1917 and 1920, known as the Occupied Enemy Territory Administration(OETA), was a side affect of the Allies' middle-eastern military campaigns during WW1.

The mandate system was created to curb the expansion of British and French colonialism; Britain administered Palestine from its Colonial Office. From 1923-1948 Palestine's official flag. was the Union Jack.

Britain's stated policy was to integrate the Muslim and Christian Arabs, the Druze, the Jews, the Armenians, the Egyptian Copts of the population of Palestine, the urbanites and the fellaheen into a single independent Palestinian nation. Over the years, however, this overt policy of a unified Palestine morphed into a covert policy of 'divide and rule'. This started as an accidental side effect of the creation of Jewish settlement police in rural areas but, towards the end of the mandate, developed into the deliberate zoning of urban areas in the mixed cities.

For an article explaining more fully the relations between Arabs and Jews in Palestine during the Mandate period this author would recommend the online article: http://historynewsnetwork.org/article/156599
Gaza: How We Got Here ... The Deep Cause of War' by Professor William R. Polk

Since some knowledge of Palestine history between 1914 and 1920 is needed to understand the problems the Palestine Police Force faced from 1920 onwards, the first section of this history starts just before WW 1 breaks out. The other sections focus on the the Mandate Era.

Onion Skin Archive Book Scanning - What is this and how do we process the pages?

April 19, 2021
CURRENT BOOK SCANNNING PROJECT.  We are currently working on a very large archive of old books that require HQ scanning to Archival TIFF images.  Once processed, these images will be prepared to PDF with OCR (optical character recognition) for a complete searchable output.   The difficulty in this order, is the books are prepared using a medium called Onion Skin Paper. Whilst we are very confident in preparing this type of medium, it is very important to be aware that there are risks with scanning, given the sometimes-fragile nature of the paper.   Tears and rips can occur, so a very gentle white glove approach is required. Equally, with the nature of onion skin, the paper is very translucent which requires a sheet of white paper to be placed under each page before scanning. This then grants a very good HQ image that we can work with.   WHAT IS ONION SKIN PAPER? Onion skin paper is a type of very light weight, almost translucent paper that somewhat resembles the outer skins
Post a Comment
Read more

July 02, 2021
Audio Tape Digital Transfer Services. We are currently working on  a large order of Ampex 1/4" audio reels for a British national museum organisation, supporting their archives with tape baking and professional digitisation of their records. cheryl@oxfordduplicationcentre.com   01865 457000 standard cassettes  |  micro cassettes   |  8-tracks   |  vinyl records   |  1/4" reel to reel   |  cd ripping   |  1/4" pro reel to reel   |  dat audio tape  Our extensive and professional Audio Video department offers audio tape transfers in Oxfordshire, London, UK and Europe.  Based in Kidlington, just outside Oxford we can support our clients with orders from 1 tape to 1000’s. We convert all formats of audio tape into digital formats at the highest quality possible, offering .wav or .aiff files format at 44.1, 48, 96, or 192kHz at 16 or 24 bit. These .wav or .aiff files can then be played on any modern PC or Mac, and then be converted to mp3 or flac, or used for a remastering proj
Post a Comment
Read more