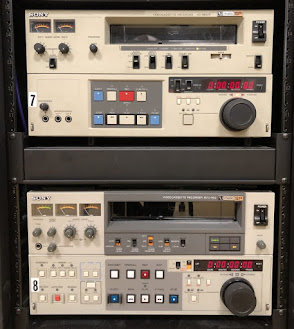 WORKING WITH UNIVERSITIES, PRODUCTION AND INDUSTRIES TO CONVERT ARCHIVES OF U-MATIC TAPE
We are highly recommended for our archival conversions to 10bit uncompressed, FFV1 and Pro-Res digital files.  Our services start from 1 unit to the many 1000's, supporting archives in the important conversion of magnetic tape media.
Please contact cheryl@oxfordduplicationcentre.com or call 01865 457000 for more information.
History of U-Matic Players

U-matic is an analogue recording videocassette format first shown by Sony in prototype in October 1969 and introduced to the market in September 1971. It was among the first video formats to contain the videotape inside a cassette, as opposed to the various reel-to-reel or open-reel formats of the time.

By 1974, U-matic had established its dominance in the non-broadcast AV field:

“The U-matic has become so widespread in industrial and business communications,” wrote Broadcast Management/Engineering, “that tape is a new vernacular in broad reaches of industry.” The cassettes and decks were relatively compact, very easy to use, rugged, and reliable.

In the words of author James Lardner:

“Decisively rejected by the consumer market for which it had been intended, the U-matic became a stunning success just the same.” 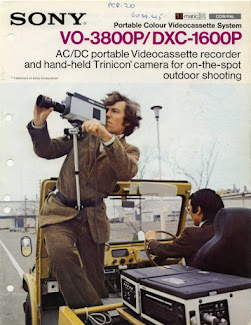 U-Matic, and then later the U-Matic SP (superior Performance) models were categorised as either:

Broadcast U-Matics were categorised as:

These were available as either portable or studio decks.

Early studio and all portable U-Matic VCRs had a drawer-type mechanism which required the tape to be inserted, followed by manual closure of the drawer (a "top-loading" mechanism).

Later studio VCRs accepted the cassette from a port opening and the cassette was pulled into and seated in the transport (a "front-loading" mechanism).

INTRODUCTION OF HIGH-BAND AND SP FOR PAL COUNTRIES

U-matic saw two revisions to improve its image quality. The first was High-Band or Hi-Band, introduced for PAL countries, with the original revision becoming known as Low-Band.

This was followed by SP (superior performance), for NTSC and PAL countries.

U-MATIC USE FOR BROADCAST

The first key development that made it possible to use U-matic tapes for broadcast was the introduction in 1973 of an advanced, digital time base corrector that could stabilize the helical signal sufficiently for broadcast.

The second was Sony’s introduction in 1974 of ‘high-band’ U-matic decks, which provided 50% greater bandwidth than the original decks had.

U-Matic SP introduced a higher quality chrome dioxide tape.  Chrome dioxide tape uses a magnetic emulsion formula CrO22. It is still considered by many oxide and tape manufacturers to have been one of the best magnetic recording particulates ever invented.

Prior to chrome dioxide tape, U-Matic tapes were made of iron oxide magnetic particles.

The structure is made up of an adhesive binder mixed with the recording material which adheres to the substrate which holds the structure together. A lubricant is usually provided to minimize head and tape wear.

Television networks and affiliates, eager to speed up news production and eliminate the heavy costs of 16mm film processing, quickly embraced the new technology. No doubt Sony’s introduction in 1975 of a complete U-matic editing system, combining record and playback decks, an electronic controller, and a stable synch source, also played a role.

One critical issue facing archives that hold U-matic tapes is the increasing unavailability of usable decks, technicians to repair them, and expertise to calibrate and maintain them. Though many different models of U-matic playback and record decks were produced,

High end U-Matic recorders were expressly designed to meet increasing demands for top quality video recording in the commerce and industry sectors.  The first ‘industrial’ U-Matic, the VO-5800 offered a host of very useful functions, most of which are controlled from the front panel.  The most technically advanced of the Sony range are the broadcast models, with model names beginning with “BVU or U-Matic SP.” The BVU-950 and the U-Matic SP model VO–9850 are particularly recommended.

Unfortunately, most U-matic tapes have not aged well. After decades in storage, many of the videotapes now have sticky-shed syndrome, a condition in which the oxide that holds the visual content is literally flaking off the polyester tape base and is moist and gummy in texture. When a videotape has sticky-shed, not only will it not play correctly, but the residue can also clog up the tape heads in the U-matic playback deck, then transfer the contaminant to other tapes played afterwards in the same deck.

To combat this, we always bake (dehumidify) our U-matic videotapes in a scientific oven at 52 Celsius (125 Fahrenheit) for at least 10 hours. We also clean the video heads inside our U-matic decks before each playback, using denatured alcohol.

·       The two Hi-Band variants are known as BVU and BVU-SP alternatively known as U-Matic SP.  BVU-SP records and plays differently to BVU. As such, U-Matic tapes recorded in BVU and BVU-SP formats cannot normally be played on Low-Band decks.

·        Low-Band and Hi-Band formats are not interchangeable.  Whilst they use the same size tapes, a Hi-Band recording will play back in black and white only on a Lo-Band machine.

Did you know Sony won an Emmy for the U-matic system in 1976?